I got lucky. It was mild*. I took the advice and became "one with the couch." But from time to time I felt energetic and wanted a low-stress project.

Because I'm based in Rhode Island, I've been telling stories about the Ocean State, some if which were collected in a slim chapbook called A Dead Politician, an Undead Clam, and an Ancient Horror.

This was one of my first "craft publishing" works in a series that I call the Little Brown Paper Books. I particularly enjoy the fact that while it's listed on Amazon, you actually can't buy a copy from them! Well… How about a follow-up collection? Something a bit less dark?

One of my favorite stories, "Roger Williams vs. the Big Blue Bugs" was developed as a spoken-word piece that was performed at WaterFire. Written down, it transformed into a piece of historical fiction, with a blend of "real" and "alt" facts.

Many people know that Roger Williams is considered the founder of the State of Rhode Island. Fewer realize that he was actually banished from the Massachusetts Bay Colony for two reasons.

First, Roger Williams believed in religious freedom, tolerance, and the separation of Church and State. This didn’t go over well with the Puritans. Although they had fled to the Americas to escape religious persecution, they were quite strict about what citizens in their territories could preach and practice. They rejected Williams’ “new and dangerous opinions.” 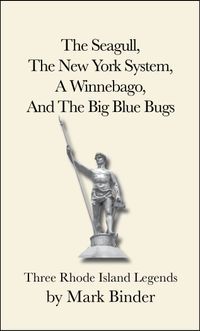